I’ve seen a lot of people use beads in their knitting/crocheting, but I’ve never had an intense desire to try it. Beads just haven’t interested me and I haven’t really come across a project in which I wanted to use them. However, I decided to use the Ice Queen pattern for a small amount of soft bright pink yarn I had laying around and thought I would give beads a try. I found some matching glass seed beads at Michaels and set about to work.

I cast-on for the project, got a crochet hook for adding the beads as I went, and started my first beading row. I almost immediately regretted my decision of using beads and after only three rows, put the project away for a week. It seemed too fiddly to take around with me, but I didn’t want to frog it, so I gave it another shot when I had a free afternoon in the hospital and tried again. 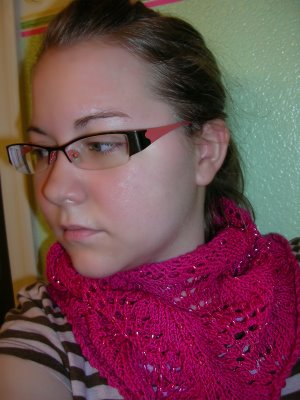 I worked all afternoon, all evening, and the next day to finish the project. I modified the edging on both ends to something simpler and ended up with this: 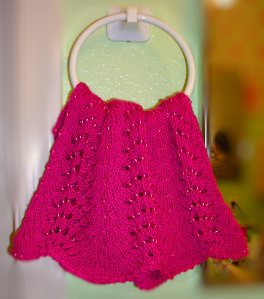 My project ended up smaller than the original, which is fine with me since I’m short, which means I have a short neck as well. I also used a slightly thicker yarn than the pattern, so it’s nice and cozy warm. I can’t wait until it cools down and I can wear my “Queen Bead.”
In about two months.

One thought on “Queen Bead”