The last post I made mentioned a contest I had found through the No End in Sight Ripple Along. I’m so happy because I won! I will be getting free yarn and other knitting-related goodies from a generous knitter who wanted to celebrate her birthday by destashing. Brave woman. I don’t think the word “destashing” should be anywhere near my stash. It might get ideas. Speaking of stash, my yarn stash has been growing substantially thanks to my new job at Michael’s. Yes, I am now employed at Michael’s and I have already worked three shifts, bought two books, and brought home two large bags of yarn to the horror of my dad (if he only knew how large the stash was, it would be hazardous to his health). One of the books I purchased is called Hot Knits by Melissa Leapman and features thirty sweater/cardigan patterns.

The author/designer has appeared several times on Knitty Gritty, so I recognized some of the sweaters, including one she wore herself. It may seem strange to buy a sweater pattern book in the middle of summer time, in Phoenix Arizona, but that can’t stop me from making a sweater. The store I work at keeps the temp nice and cool for the customers, but rather cold for a weakling like me. So, I need a new sweater. And a new sweater calls for new yarn! I purchased eight skeins of Lion Brand Homespun in Fuchsia. It was on clearance, originally $4.49 marked down to $2.00 and I got an additional .50 off with my 25% discount. And of course I had to buy eight skeins, even though I technically only needed six, because I can’t be too careful with clearance and the potential to run out and not be able to finish the beautiful sweater I have planned.

I am also working on a ripple afghan in a single variegated yarn to donate to Project Linus. It will make the third one I have crocheted. I haven’t had a chance to drop them off yet, but I will make sure to take pictures before I do. I know they will go to good homes. For now, the ripple is hanging out in my oversized purse and accompanies me everywhere. (Yes, my purse is large enough to carry normal purse stuff, plus a one-pound skein of yarn and the work-in-progress, which happens to be an afghan, and a book. Don’t judge me.) 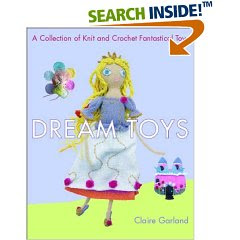 When my little cousin Karee saw the mermaid and crab, she fell in love with them. You see, her favorite Disney Princess is Ariel and she loves mermaids. Later that night, I let her hold the mermaid and then let her keep the mermaid and the crab. I now have to make another mermaid for Wendy and a Belle doll (based on the princess pattern shown on the front cover with minor color adjustments) for cousin Khloe. 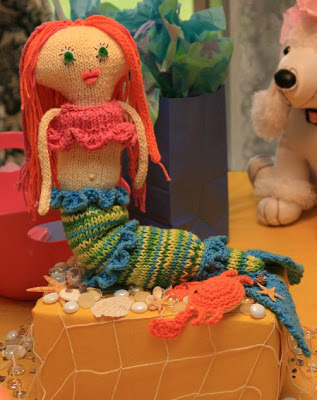 I used Sugar and Creme 100% cotton in orange, blue, pink, creme, and variegated green/yellow/blue for the mermaid. I’m not fond of this cotton, but it turned out fine, and I will be using it to make the next two dolls.

A friend at the party was amazed that I could knit a mermaid. I love what she said to me: “I can barely knit in a straight line to make a scarf, and here is Jenn knitting mermaids. I want to knit mermaids.”

One thought on “Busy Bee”